So I started work on an RG65, and I wanted to share it an get some input. She is still overweight, and has her centers in the wrong place, but she’s at least in the ballpark. right now she has a beam of 125mm and a hull depth of 39mm.

What is everyone using for freeboard? She has 57 at the bow, & 44 stern, but it doesn’t look right. I think i need to lower it at the stern.

There don’t seem to be any fixed ideas about freeboard. Your design looks similar to the German Blue Splash in that respect whereas, e.g., the French Apsara has significantly less.

if it will be of any help, I’ll measure and mail you the dimensions of my JIF65 tonight.

Keep in mind, the JIF tends to sail with a bow up attitude which is helpful when gust hits and pushes bow down. Also it is a hard chine design, which may have different freeboard dimensions than a curved bilge hull.

The photo was of grandson’s boat which was my first and a prototype. It was sailing before deck was attached and plastic tape used to reduce water splashing inside. Note bow position. Radio gear, and batteries are all clustered around the keel trunk. Moving battery pack forward of bulkhead and mast would bring the bow down if so desired.

if it will be of any help, I’ll measure and mail you the dimensions of my JIF65 tonight.

That would be of great help, I’m just trying to get stuff decently close.

Am i correct in my assessment that most RG65 designs are wide because they are scaled/modifies IOM designs?

Based on my quick review of the class rules, it seems like a hull with a beam between 110mm & 140mm would be optimum.

Actually, I was told the design was originally based on a 1/2 Marblehead. I think some of the older designs reflect this and my JIF65 tends to have a very narrow and small transom.

Most of the newer designs coming out do look like scaled down IOM boats (the new Bantock ROGUE as example) but a few are also built to “look” like a VOR boat too.

The Laerke is one such IOM design that has transitioned to the RG size. I think there are plans out there for a scaled down Triple Crown, and I’ve discussed the US1M design “Zipper” with the original designer who provided some suggestions for conversion. Not sure how well they do against the more traditional boats.

My personal feeling is now “everyone” is a boat designer so until we get together with a bunch of different designs, swap boats/thumbs, it is hard to tell. Can I assume your RG design will follow your Vanquish IOM - or are you considering something based on your design work for the 3R Class?

I guess the third option is “none of your business - you’ll see the stern of it when we hit the water!”

Problem - every time I look, there is yet another design I want to build. :rolleyes:

Can I assume your RG design will follow your Vanquish IOM - or are you considering something based on your design work for the 3R Class?

It will be a cross of both, because as I’ve worked on different designs my opinions of what works best has changed. My design philosophy is as follows.

here are my measurements for the JIF65 free-board:

Dan
I tend to like the looks of the slightly wider RG65 designs and have already produced a modified Laerke (260mm beam) and am in the process of making a second narrower (240mm beam) modified Laerke. Like Dick, I’m already thinking about the next hull and have recently been admiring the lines of your Vanquish IOM, speculating whether it would work as a straight scale down exercise.
Do you think this would work?
Would you be happy for some one to try it?
You mention your thinking has changed. What changes would you make to the Vanquish?
Thanks in advance
Phil

here in Germany, we have a scaled down vresion of the Vanquish. It has been modified to some extent, but I don’t know exactly what has been done…Joachin (nick: haegar) knows more about the design. I think the boat was made less wide with some additional freeboard. Overall, the scaled down and modified Vanquish shows a very good performance in nearly all conditions. The fleet of modified Vanquishs (now called Banquish, because of the guy who did the mod) has grown significantly in the last year and one came in second in the 2008 nationals…

[edit] just saw that you’re from Switzerland, so you probably know…[/edit]

A friend just built the new Rogue from Graham Bantock. It looks like a good boat but will need some adjustments and tune. 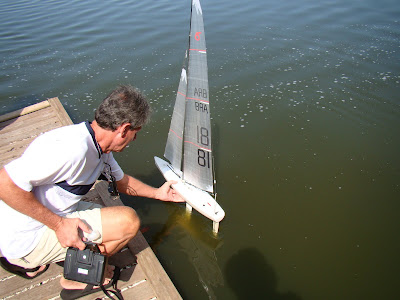 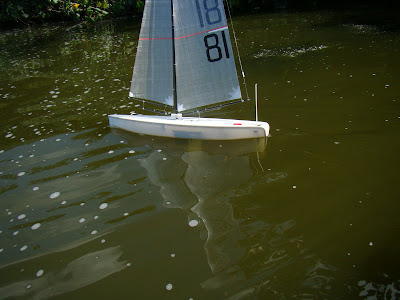 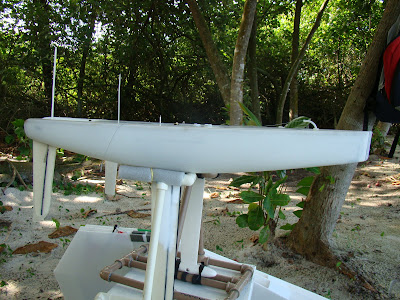 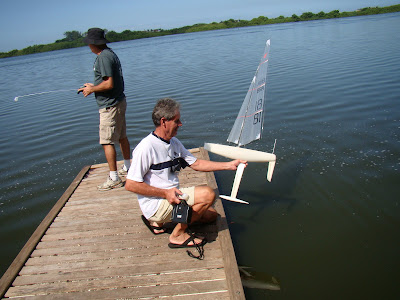 There are more photos and a video in my blog http://www.rg65-velarc.blogspot.com. I hope you like it.

Hi! We developed a complete new RG65 Design, based on a BigBoat TP52. It sails great, look at this video.
Now I´m builing a new mast and new sails for light winds. I try to make a flexy top, which open the main automatically.
The hull with deck and rc-mounting plate is less than 200g.

Hi, Dan,
it depends.
My first RG65 was a downscaled Laerke without any modification. It was a outstanding boat in strong winds with some weaks in light wind conditions. The latter was mainly due to some mistakes I made during building. The boat was on the upper limit of weight and the main weight was to far at the stern. This resulted in a high wetted surface - not good for light winds. Using a less heavy keel with the bulb mounted more forward made the Laerke65 more competitive also in light winds.

The modifications of the Vanquish lines by Ulli Burbath were severe. It is no longer a Vanquish. The so-called Banquish is based on a your Vanquish design, but that’s all.
All the proportions have been changed and the lines in the bow section have been further modified by Ulli. But this new design results in a very good all purpose boat.

Today the boats are getting less heavy here in Germany, so downscaled IOM designs no longer fit well into the new developments. A downscaled IOM has something around 1100g displacement, the new designs have around 900-950g. For my opinion the development will go back to half sized M-boats, but this is a very agressive goal in terms of displacement. Going below 850g will be very challenging.

For me it still unclear what the tradeoffs between longer fins/lighter bulbs and the reduced displacement will be. I do not believe that you will reach a total weight of 800g or even below without reducing the weight of the keel bulb. Otherwise the hull will not survive any collision.

It is very interesting to see which direction the development of the class will go.

It would be interesting to see how this classic M would perform at half size. Earl should be the one to try, though;)

Everyone seems to be downsizing these days

Another way to develop an RG65 design is to start small…here’s one for you to consider.

Martin, I agree that Earl doing a mini Riptide would be appropriate. Trouble is, it would take him 7 times to get it right!

So I started work on an RG65, and I wanted to share it an get some input. She is still overweight, and has her centers in the wrong place, but she’s at least in the ballpark. right now she has a beam of 125mm and a hull depth of 39mm.

What is everyone using for freeboard? She has 57 at the bow, & 44 stern, but it doesn’t look right. I think i need to lower it at the stern. My RG is a scaled down “Vanquish”. But no normally 65%

I think the yacht is well going. Here with Sail number 2 (IOM sailarea scaled down 70%)

Hi Ulli,
I too have a 65cm Vanquish

More pics and a clip can be found on my website

Hi Ulli,
I too have a 65cm Vanquish

More pics and a clip can be found on my website

@ Siri,
Welcome in the Vanquish family.
But my yacht called “Banquish” in Germany (every time I sayed Vanquish modifyed, but RC-station created new name (“B” from "B"urbat because I many points modifyed)
Than as I builded the hull, I sended positive form to Austria (5 hulls builded) The form drived to München, Donauwörth und the way ended in Hamburg (there now as a present from me to RC-station).
8 Banquishs will comes to the 5. German Chamoion Cips.entrylist (Main organisator haegar)