Anyone have any experience of this stuff? Could be good for the health/environmentally conscious. Its’s expensive - but not that expensive and the effective density (max 10000 kg/m3 in bead form) is probably higher then most people get when they do not want to actually melt lead.

angus, that stuff looks awesome. i was gonna use birdshot, or trout splitshot, but a powder? ya man.

Tungsten is a suitable material for lead replacement applications. It has an even higher density than lead.

Rule change on grounds of health and the environment? :scared:

Depends what you mean by the ‘material’ - the casting compunds or its components. If it isn’t legal, it probably should be. I haven’t tracked it down but there are rumours of some impending legislation in Europe that could make a lead keel illegal (like police, courts and judges illegal). We found out about it because we are designing a Footy for use in schools and they are VERY unhappy about lead.

Depends what you mean by the ‘material’ - the casting compunds or its components.

Now that would be an “interpretation”, like calling a cake “materials” along with the eggs and flour

‘The materials used include concrete …’

Yes, it seems that most every subsequent study done on lead shows it to be more toxic than predecessor studies suggested. I have the same problem as Angus in that lead is out of the question for any student activity. For those who think this is an overreaction, may I respectfully submit something that I was told by a very respected environmental scientist: the problem isn’t exposure to any potentially dangerous substance by itself, the problem is exposure to that substance in the context of all the other stuff we ingest in an industrial society.

The alternatives I am pursuing include bronze castings, lead-free pewter, and now the tungsten powder/resin mix. Lead-free pewter, “potted” to reduce exposure to water, is the current leader.

‘The materials used include concrete …’

Oh well then, why not encase some iridium shavings in some epoxy and you’re done

is the density of iridium legal? 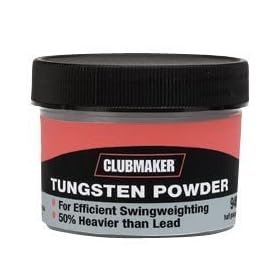 BUT - remember, the shipping cost is like lead, sometime too expensive to ship - try to find locally.

The biggest argument against iridium (apart from any rules considerations) is that the best price I can get for the material for a Footy bulb is about GBP 90 = USD 180!

[FONT=Verdana]You might want to be carefull with tungsten, it is a known [SIZE=3]carcinogen. That being said just like lead its fine to use when you take proper precautions.

All this legal BS about ban this and ban that is really starting to annoy the crap out of me. Forget protecting the world from the dumb, and the dumb of the world If someone is polluting take a sledge hammer to them, legally speaking. If they are not smart enough to take proper precautions, then let Darwin have his dues.

In short stop penalizing the majority, for the arrogance/stupidity of the minority.
[/SIZE][/FONT]

It’s a pity depleted uranium is over the density limit:D

At work I use carbide inserts all of the time. Used to grind them until the health issues reared up. One of the insert types is .500 round X .125 thick and flat ( no chip breaker ). Always thought that if they were larger in diameter they could be stacked and glued together for a nice keel weight. Was informed early in my r/c sail days this would be illegal ( greater density than lead ). If you want used inserts go to your local scrap dealer. They buy at $20 per pound and would be happy to sell some to sailors. Clyde

Is the lead density rule obsolete/misguided then?

Don’t be too misled by noises about toxicity of tungsten. Having taken to trouble to dinf and read the American ATSDR Toxicoligical Profile of tungsten, it really seems rather harmless stuff. DON’T make bulbs out of Big Macs if you value your life.

I think you’d have to spin the blade too. I’ve rammed my bowsprit tipped footys into each other and the result could best be described as “boink”. They don’t have the mass to damage each other. It sure does slow them down though. Surface tension between the 2 hulls is difficult to overcome when you want to separate them again too.:lol:

This isn’t a Footy race. (BTW, I know the 25 skipper being run over here.)

OK - I’ll call mine ‘Retiarius’. What’s yours? And, by the way, who’s paying for the lion food?

I used to have a dinghy called ‘quipu’: an Inca mnomonic device of knotted string.