Ok how many want to build a schooner???

I do and am working on one right now. I have hit lots of problems in building her and have asked a lot of question of those that have built schooners. Jaydee must be sick of my emails to the point he has set up a schooner construction page at his web site.
If your interested in building a schooner check out JAYDEE’s web page.
www.john-dowd.co.uk

1/20th Scale model of the Schooner Bluenose. Just so you realise the size of a 1/20 scale Bluenose
“Seven feet long, masts around six feet high and tipping the scales at 75 lb”

Damn big boat but what a beauty to see sailing.

First article is just a intro of what Jaydee has planned for the construction page . So now the emails to him will be about when the next article will appear.

Jaydee trust me I will be following you web site and building along with your articles.

Had I known I would live this long, I’d have taken better care of my car.

thanks for updating the site with pictures!! arggh still YOUNG and so many projects…hmm time to retire SOON [;)]

jeff
you figured out a way to control you front jibs?
they overlap, my only guess would be to set up a tolley system and on a seperate channel. maybe even a program radio. to say port neutral or starboard.
cougar

Cougar,
The Jibs do not move, I set them port or starboard on the Bank and just sail.
With so much sail area on a 6 foot hull, I dont think moving the Jibs would make very much difference, the sail area is a shade under 3,500 sq inches.
Very few people have ever noticed that the Jibs are on the wrong tack!.
JayDee. [:-pirate]

I was talking to a fella in Victoria who has two or three schooners and what he does is tie the jib sheet to the forestay with a little slack so that it can self tack. Not perfect but he says that without the jib the boat had almost uncontrolable weather helm and the jib corrected it. I’m not talking about the foresail, I mean the true jib. I’m going to try it on the Cicely but I think I will put a little stiffening in the foot of the jibs.
Don

Don,
Try thin Stainless Steel wire in the lower seams, one of our Club Members did it with a Thames Barge, worked OK.
Jaydee. [:-pirate]

Since we’re talking about Schooners and construction pages, I thought I’d toss mine in here too. Let me know what your think.

From JayDee.
Bluenose, ready to sail. 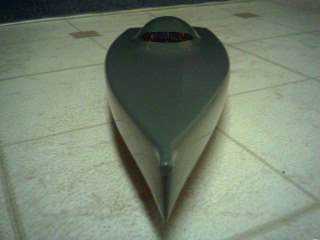 Here is one just getting started

Larry,
That is a fine Hull, what size is it?.
Is it Scale, or just going to be a Schooner?.
Post some details please.
JayDee.

Does anyone have an idea of what schooner this might be - and if any plans are available? Perhaps it was scratch built - I am searching on behalf of a friend who saw the photo and is interested in finding out if any plans exist.

Dick,
I have seen that photo before, but not sure where, think it was on a USA boat Club website.
JayDee.

Ratz - thought sure you would know!

A police officer at work wants to build for a room decoration - and I have been trying to convince him to add remote control “just in case” !

Will keep looking - thanks John.

You struck gold, Dick. What do you need. This is the Cicely, a 130’ composite(metal frame wooden planked hull) Fife design, built in 1903 for Cecil Quentin. I have lines drawings(from a magazine-small but usable) and a deck plan I got from the Scottish Maritime museum.
http://www.researchthepast.com/cicely_lamorna.htm

My Cicely is ready to go but it will only fit in my R/V trailer so I have to wait til camping time to launch her. Mine is 48" bowspit to stern and if it was much smaller I think it would get tricky to R/C, It gets real small at the rudder area.
Let me know where to send stuff.
Don

Don - between time of post to now, I also got a personal note and request about schooners from another individual. What did you schooner guys do to drum up the interest? :icon_smil

I am thinking a set of cross section templates and spacing distance will probably get them started laying up the hull. Not sure what you have - and if full plans - what costs? You can PM or email me off-line. If plan set is large, I have access to a large format printer/scanner/copier. 36 inches wide by xx feet long…

Dick, if you PM me your e-mail address I will send you what I can that way. The deck plan is too big to scan so I would have to mail you a copy. Lets start with the e-mail.
Don

Don - between time of post to now, I also got a personal note and request about schooners from another individual. What did you schooner guys do to drum up the interest? :icon_smil

Schooners are a lot prettier than multi-hulls.
Don

Ooh dear, Diki !
Stuck your chin out
Got it smacked too!!

There is a lot of truth in what Don says.
When the general public see a Schooner sailing along, they stop and look, almost without realising they have done it!.
The next thing they do, is to point it out to the kids, that is, IF, the kids have not seen it.
Usually the kids are running to the guy with the Transmitter!.

The public seem to know and recognise “Schooner shaped” boats better than a Multi.
I will have to start asking them this year, what it is that they like.

When it has been very safe to do so, I have allowed some VERY young kids to “have a go” with my Schooner, they are VERY good at it !.
May be due to the computer games they play, some don’t realise just how good they are! - - - I never do tell 'em!.

Of course all of the above is “My personal Opinion” Ha ha ha!.