has anybody ever tried to convert a regular servo. into a drum servo? what i am looking at is turning a futaba s3004 servo. one that has a 90 degree turn into a servo that will turn 760 degrees . just wondering if anybody has treid to make a mini drum? i am looking at making a small cat. and only has room for the standard servos. and no room for a arm.
cougar
long live the cup and cris dickson

Cougar there is a guy here in Australia that does it frequently. The other thing is that someone on here has put on the method before, so you will probably here something. I don’t have the electronics mind to do it or even think of doing it.

Cougar
If you don’t mind an external pot there is instructions on page 53 of the US1M contruction files. I used one on my first boat(a Mistral)with about a 3/4 " drum. It was slow but it worked. The tough part is finding a 10 turn pot. I had to get mine fron California. If Steve Andre is listening he might have a better source for pots.
Don

don i saw that.
i am just wondering is what the size could be. and the servo looks to be lying on it side? good idea and i know that works. played around with an old servo.but i ended up with a servo that was over 4 inch high. i might have done something wrong. but mine was also slow. but worked real well. and was very strong.
cougar
long live the cup and cris dickson

I go to my local electronics parts store and buy an 18-turn cermet trimmer pot manufactured by BI Technologies and packaged by caltronics. PartNumber is P68WR5K. I have to put a shaft on the screw and mount the pot where the old pot used to be, so some use of a Dremel tool and some cement is required. I use Hitec digital servos, so I can program the turns I need. The servos are fast, so the drums are small and you get more torque than the rating which is rated at a 1" radius.

what about the little Futaba drum winch like the 5801? The other way you can go would be with a motor with the gearbox built on as a gear head. You can get Maxxon motors (Swiss) that are incredile quality for $25.00 and already reduced to as low as 100:1 -250:1 and they are strong enough to pull your boat apart. You can use a micro servo as used in gliders and a DPDT switch to interpolate and VOILA, instant winch for about $65.00

The drawback is that they are non-propotional and slow compared to proportional winches… you know… the ones that cost $150.00 That is what you pay for. I use them for backstay, boomvang and such as that and they are perfect.

The 18 turn pot that Steve talked about in the Caltronics online catalog:

Just for info - I believe that a pot that is listed as x turns will (always?) turn a maximum of much fewer. I guess it has to do with the resistance - relative resistance - something? The 10 turn pot from the Newark catalog listed in the US1M-how-to only turns 2 3/4 revs when teamed up with the S148. I hope someone corrects me on this or explains it.

Let’s use 5K pots in all these examples. The standard 270 degree pot in a servo rotates about 90 degrees (depends on the transmitter), which is the middle third of the pot’s range. If the same circuit board in a servo is connected to a 10-turn pot, the rotation will be about 2.75 to 3.3 turns or a third of the range. Same way on the 18-turn pot, 6 turns because the range is still 5K from end to end of the wiped surface (the variable resistor). I use the 18-turn pot because it is small and available.

You can use higher resistance pots to reduce the turns, but you sacrifice resolution. You get more drift at the end points with higher resistance. You could use a 50K pot to make only a couple of turns, but the drum would drift into the end point over the last full turn at a slower speed, stop and then lose position under tension (lower holding power).

I use digital servos to program the range to where I need it and the 5K pot to get better resolution. Some old servos used to have such good feedback circuitry, the rotations would stop on a dime, like dynamic braking, with high resistance (50K)pots. I haven’t found one of these in years.

As an aside, commercial sail winches usually use a combination of plastic reduction or worm gears and standard 270 degree wiper pots. It’s a cheaper solution than a precision pot.

I see said the blind man to the crippled nudist who put his hands in his pockets & promptly walked away. 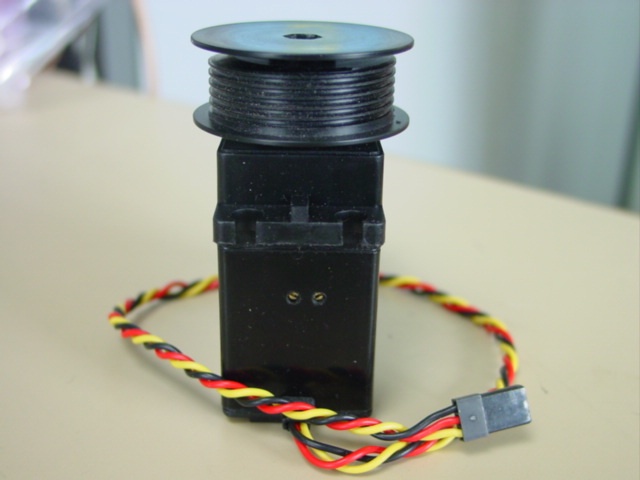 you can see the 2 5K pot for the travel adjust 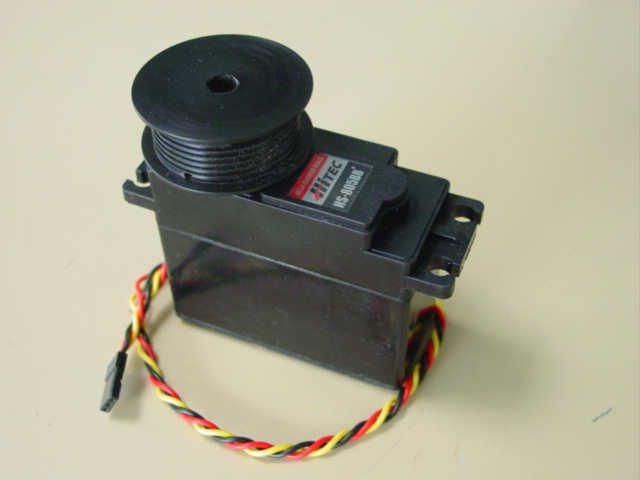 realy good job pat
but i need more information. you did a real good job. now tell us how you did it?
please
cougar
long live the cup and cris dickson

Don’t know if any one has suggested this idea, it’s from a friend of mine. Worked very well on land yachts.

Get a cheap servo turn it on and center it then unplug and pull the top of it without moving it, cut the top off the pot and superglue it so that it doesn?t move (so the servo always things its in the center position) and then cut the little lug of the big gear so that it can keep spinning, now when you push the stick forwards the servo will keep spinning in one way but think that it never gets there cause the feed back pot is glued up, let go of the stick and it stops spinning, pull the stick back and it goes the other way. Also since you are using the servo gearing you have loads of torque. Turn up a small pulley and superglue to a big servo horn and you are done

I used this method on my first boat and it worked well except it would creep. You could adjust the trim and get the creep to stop but as soon as the boat moved off a little the servo would start to creep again. The farther away the boat was the faster it would creep and you never knew which way it would go. As long as it crept out, it was O.K. because you could just sheet in, but if it crept in you couldn’t really tell from the shore and it would start to bend things. If I could have solved this problem I would still be using this method. If anyone knows a way around it let me know.