let me tell you what happended to me with a hobbyking 2.4 4 channel radio.
I received it and used a whole weekend on 1.5 alkaline batteries, as it performedvery well i put in some 1.2 recgargeable batteries.

Then, I let it charge all night long at 250 Mha…12 hours was more than enought. Probably I turned the radio On before disconnect the charging plug and there after ( can be sure on that) …Then when i connected again the charging plug, the charger does not turned on the led that indicates it is charging and also the radio does not worked with 1.2 cells. not even turn on the led red, nothing!!!

I did not test if -prior to charge the 1.2 cells- the radio worked on them.
but many skeepers say they do.

My only guess is that when I turned on the Tx with the charging plug connected…something did shortcut inside and now it is not capable to work with 1.2 volts and receive external charge…

But if i put in some 1.5 cells it works perfectly well, as always.

Do any of you guys have any idea what could happen or if some electrician could replace it with simple tools at any electrical repair shop, probably is just a diode, or resistence or something like that…i don´t know…

Have you checked the voltage at your receiver? May be it’s worthwhile to test it with 5 cells …

It may be that the internal resistance of your power supply is too high and the voltage drop is to big when current flows. It is common knowledge now that some 2,4 GHz radios need special care concerning the power supply.

The reason for a high voltage drop may be

btw, have you you a carefully welded accu pack? or are you using some kind of cheap battery holder - then you may have a lot of additional contact resistance.

Probably your problem is in the battery, not the radio.

The only charger that works OK for me is a Sony Intelligent charger, that works with the battery temperature to decide when the batteries are charged, and always one battery in the pack need a very long time to be charged, always a different battery, I don’t know why.

Probably your problem is in the battery, not the radio.

The only charger that works OK for me is a Sony Intelligent charger, that works with the battery temperature to decide when the batteries are charged, and always one battery in the pack need a very long time to be charged, always a different battery, I don’t know why.

Do you have a product number or manufacturing number for that charger? Will see if they are available here. If they are, will advise and perhaps I can assist Tato and friends tin getting a few - or identify where they can be purchased.

These units, and its 6 and 9 channel bigger brothers circuitry run on 5 volts.
The 9-12 volts pumped into them have half their energy wasted to heat by a voltage regulator working hard and getting very hot!
It is a mystery why they have done this but it can be rectified (!) by replacing the eight batteries with just two cheap, protected lithium ion batteries!
A small problem is the low voltage led indicator will now be permanently on. The large capacity of the lithium ions will mean that you will still have a days sailing. You will have to externally charge them.
http://www.rcmodelreviews.com/tendollarbattery.shtml

if one has a desire to run 6 volts for servo-winch for torque or speed reasons - does it make sense to run a 6 volt battery pack via a “Y” Harness to allow full battery to the winch servo, allowing the receiver to step down volts from 6 to 5 for the rest of the internals?

Do you have a product number or manufacturing number for that charger? Will see if they are available here. If they are, will advise and perhaps I can assist Tato and friends tin getting a few - or identify where they can be purchased.

The model is Sony BCG-34HRE.

I have two, but are not enough to charge all my batteries simultaneously, then I want one or two more.

Um - you seem to have changed topic from transmitter to receiver at post 2?

Hmmmmmmmmm - so I have. Apologies

The model is Sony BCG-34HRE.

I have two, but are not enough to charge all my batteries simultaneously, then I want one or two more.

here is a company selling these units - and they indicate they will ship world wide. Price is $25 (USD) and they offer a “Buy It Now” option.

Will continue to look for other opportunities.

ADDED: Possible replacement for the above unit? 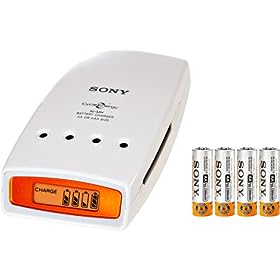 Thanks for the inputs, let me tell you some more facts.

1.- This is the charger I have been using for years…the wire for the plugs is thick enought and I have been using ithem with High capacity packs for 1/4 scale aircrafts as well, never a problem and always checking with a voltimeter, after before and after charge.
http://www3.towerhobbies.com/cgi-bin/wti0001p?&I=LXL331&P=7

These days I should get at home the turnigy acucell 6, that will provide me a good tool for cycling batteries,a dn allow li po and li iom packs to be charged.

I got very tempted with the idea of Li ion cells. So in my next trip to US, that should be soon at the end of october I will order some packs for 2 or 3 2.4 ghz Tx.

I wonder if there is a chance to use them in regular Am of Fm futaba transmitter, for my airplanes, cause a PCM 7 ch futaba last barely one morning of consistent flying al, the time, it seems that too many functions consumes a lot of energy. but 3.7v x 3 = 11.1v…so i wonder if the Tx can handle that voltage. If not, where Culd I get a voltage regulator.

It will be usefull too, because some winch servos can take up to 7.2 volts, so a “Y” harness will be desirable, and a voltage regulator for the transmitter will be needed, or not???

2.- The cells are the same brand I have been using for the IOms since two years ago, no problem on that.

3.- The cell are pressed into the Tx where they fit very tight, so no need for soldering. (I did that in a Futaba attack 2ch and when i went out of charge at the pound, i had the problem i could not make a emergency replace with alkaline cells from the shop in front of the street…that is bad luck!!)

4.- The Rx pack that i used for tests all the time is a 5 cells 2400 Mha, soldered cells, that works perfectly.

5.- The cells I used where brand new, I plugged in the charging plug and the light in the charger turned on. i asumed that the cells was being charged and went to sleep. yesterday i replaced the cells for others i was using in another Tx and the radio was working fine, SO…

The problem was that for some reason the Tx did no allow me to charge the cells inside directly trough it.

I will check on that later, cause I am preparing my stuff to go to sudamerican Championship tomorrow ( october 9th to12th, Rg 65 and IOM one design ULY)

So I was thinking to solder some wires directly from the batteries to the plug female at the side of the TX, jumping the internal circuitry.

That will solve the problem from the root. cuase now does not matter which cells i place into the trnasmitter, the charging led in the charger will not tur on, so the problem is beteewn the cells and the charging outlet in the Tx.

At least now i have the problem localized!!!

I would like some inputs about using the Li Ion cells for regular Futaba transmitters and eventually for Rx packs.

Most transmitters are designed for 12volt dry cell operation. Some using proprietry nicad or NiMh packs may not. You are best to refer to the manufacturer’s specifications. Transmitters normally use a regulator to maintain an constant voltage as batteries drain.
A 3 cell LiPo/LiIon pack will have peak charged voltage of 12.75. That should be ok most of the time. If in doubt you can use a diode in series to drop the voltage by about .7v (or two to drop 1.4v). Diodes are polarized so if it doesn’t work just reverse it. You can salvage them from an old power supply section of an electronic device using AC.
You should use a protected pack to avoid over-discharge (http://www.dealextreme.com/details.dx/sku.5776) or
(http://www.dealextreme.com/details.dx/sku.26112)
You will not be able to charge them through your transmitter’s charge jack.

Your problems may be the diode protection in your transmitter’s charge circuit. This is designed to prevent reverse charging which will damage your batteries. It may work for the low charge rates of NiCads, 60mAh - but not coping with 250mA. Try charging your NiMh in the transmitter at a lower rate, for longer. If you use a dedicated charger that is not going to allow accidental reverse charging, you might try taking the diode out of the circuit (put a jumper over it).
It is not advisable to rewire the socket direct to the batteries. The socket will contain a switch that isolates the batteries from the transmitter when charging (to prevent damage to the transmitter when switching the unit on while charging).

If you are using a 2s pack with a receiver you are best to use an external BEC circuit to drop the receiver voltage to 5 or 6v and a Y lead allowing the winch to use the (up to) 8.5v.
http://www.dealextreme.com/details.dx/sku.15149
You may prefer a non-switch mode BEC for efficiency or to reduce interference, but they don’t list one.
http://www.rcgroups.com/forums/showpost.php?p=12745083&postcount=187

Best of luck and pleasure in your sailing comps!

Many thanks for your detailed report…
I am leaving for few days to the sudamerican championship, but when I come back i will try to charge the Tx at 50 - 60 Mha and wait to notice the charginfg led in the Tx turning on as the cells being charged. If not, it means that something between the charging outlet in the Tx and the batteries has failed, but as the power goes from the cells to the Tx with no problem, I could jump the outlet with a futaba extension cord, so when charging the cells there will be no chance to turn on the Tx.

Using li po / li ion on board the sailboat sounds too complicated to mee If I need to add more and more devices. The KISS principle is based in the fact that “what is not aboard…does not fail!!” So I think I will stick to my 5 cell Ni Mh packs.

Do you know how much time should take between ordering trustfire cells and receive them in Johnstown, NY??? I will be there from oct. 30th to nov. 15th. Would be nice to take the chance to order from them.

Tato - good luck at the Championships… Hope you do well and have good weather. Please post photos if you get a chance to take some… especially close up rigging and servo location details if hatch covers are left open when not racing.

Will be a pleasure to take pictures. If you want I can put all that in a cd and send it to you while staying in Johnstown, NY. That way you can have them full quality for details!!

If you want sonme previwe of what will be seen at the event, check this report of my friend Christian Roessner who flew to Buenos Aires just to race on sunday with argentinians Rg 65!!!

also from the home page http://www.cvrc.cl/ you will be able to seee the results each day…with Instant reports from the deck!!, That is what my friends promised.