In a recent post, Roy L mentioned a Brit sailor having trouble with 20-second wind shifts in NYC…that’d be like the tradewinds when we’re having a bad day in Plainville, CT.

The scene? We have a 7 acre pond with great access and parking. The town, in its infinite wisdom, put up a chainlink fence to keep the geese out…I guess nobody told the parks administrator that geese have, um, wings… But the fence does keep casual walk-throughs to a minimum. We have access to every part of the pond - no boats stuck in inaccessible weeds here!!! And spooking geese with a couple quick jibes is fun… (remind me to tell you of the ‘missing’ sailors sometime. Cars in the parking lot, chairs on the bank - but no skippers…oh wait!!! There’s our intrepid 70=somethings up the other end of the pond, hooting, laughing and chasing geese!!!)

Anyway - we also have trees on all 4 sides of the pond… When we’re having a bad-wind day, a typical rrace leg will have 2 boats 10 feet apart on opposite tacks, another suddendly caught in ‘stays’ with its mast telltale point straight up, with yet another cursing the fact that his boat just suffered 2 knockdowns - in 2 different directions and within 2 seconds!!!

Anybody else with small-pond blues?

There is nothing - absolutely nothing - half so much worth doing as simply messing about in boats. Kenneth Graeme, Wind in the Willows.

Edina Yacht Club here in Minneapolis is not the “best” place for sailing, but it is the best place for r/c sailing PROMOTION. A series of several small lakes connected by a “river” of sorts, the community provided area is for both sail and fast electrics. Wonderful looking place, but (unfortunately) it is the middle of a huge shopping mall/facilitiy with stores almost around the entire sailing area. Best sailing is if wind is more north/south, since it then “funnels” up the ponds (or down) with some decent velocity. Another “NEAT???” feature is a large water fountain at the north pond that tends to squirt (spray) water about 30 feet in the air. Waterproof decks and topside a must. BUT - it brings in the crowds to watch, has hosted the Fairwind Nationals, and has a few national caliber sailors.

Locally the town pond (next to Mississippi River) has a neat platform for launching canoes. Built out into the pond, this large (10 x 40 foot) dock allows you to simply place boat in water. “M” Class deep keels have weed problems, and one side of pond ends against a tall bluff. (You NEVER sail near it).

Several of us are looking at a large sand “borrow pit” that has no trees near it - although new homes are to the east. They are putting in a nice east end park, so prevailing winds would normally come from west south/west and across the lake, making sailing a bit more stable. Looking to develop a possible “South Metro Club” at that location as well.

Certainly envy the clubs where sailing ponds were provided, but can see where the tress planted to make it look nice often defeat the purpose.

I have the same conditions as Rob with the ever changing wind but our pond is only 100’ x 200’. The tri still beats everything in all conditions except knock downs and that was only once. I have yet to sail it against my 10R or finished my other tri’s but soon.

Gee Dick, I had a great time sailing at Cenential Lakes (Edina MYC). It is nice to not have to think about when to tack becasue the wind just forces its will upon you.

On the practice day for the Fairwind Nationals, the wind was coming in over the large movie theater at the northwest corner of the pond. The wind would alternately come from the North and then from the west (90 degree shifts every 10 or 15 seconds) so as long as you kept your boat pointed due Northwest, you would be on either port or starboard depending on the wind. You would tack every few seconds when the wind changed, but you didn’t need to change course to tack, so that was nice!

Seriously, it was pretty shifty on that pond, but luckily we had some nice breeze from the south for the two race days, so it was about as good as it gets there. The piped in music was nice as well. Very calming!

Our pond here in Ann Arbor has some 1 story buildings on one side, but it quite open on all the other sides, so we do not have huge problems with building induces wind shifts.

Of course, I might be numb to shifts as I spent many years sailing on the Charles River in Boston where the Prudential and Hancock Buildings made for some interesting wind conditions on the river…

And the water spray from the fountain? [:D][:D]

Best place to “scrub off” your close-by competition. With wind from the west (or there-abouts) the spray drifts to the east. Simply stay ahead of competition, and as close as possible to the perimeter of the spray. There are no local rules making the fountain an obstical, so you can lead your competitior in pretty close and if you are paying attention and are to windward, ease the sheets and let him catch up - but retain windward position. He will concentrate very hard on trying to sail under you that he may forget about the spray. Simply tack away and if you hit the wind shifts just right, competitor is under the spray perimeter as wind eases/shifts, and of course the spray moves west and right over his boat. This results in wet sails, sticking telltales, and laughs from many around the area. Also tells whether the boat is waterproof “on top”.

I speak from experience, having tried sailing the Laser there, and paying more attention to boat trim and the guy ahead. Completely forgot about the spray drifting to the east - until it drifted to the west and over me! [:-banghead]

Here is an example for those who don’t sail there: 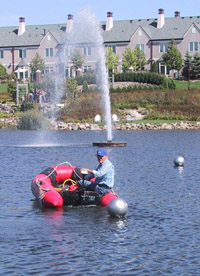 Fred Ferris told me a story how he had actually sailed through the spray (aparently they use the fountain as a "mark of the course on occasion) and came out the other side unscathed, but one of the other guys following tried the same thing and was dismasted by the force of the falling water.

They got permission to turn off the fountain for the Fairwind Regatta if we needed to align the course in such a way that the fountain was in the middle of a leg. We never had to…

And, yes, people from Minnesota are nice. It was a great place to hold a regatta.